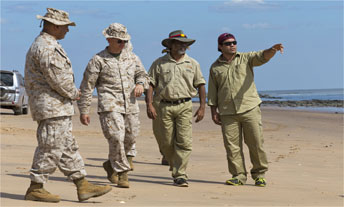 Exercise Talisman Sabre 2015 was a combined Australian and United States (US) training activity which involved up to 30,000 personnel. As part of this major exercise Defence planned and carried out several training exercises in various locations in the Northern Territory.  In April 2015 the AAPA issued an Authority Certificate to the Department of Defence for military training on Finniss River Station and Native Point in the Darwin Hinterland region. Authority Certificates for Lee Point in Darwin and the Bradshaw Training Area near Katherine are expected to be completed in early 2015-2016. The project has allowed for a highly positive engagement between Aboriginal custodians and personnel from both the Australian and US forces.